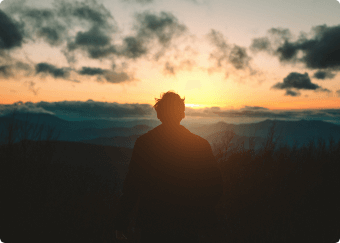 Rene Descartes (1596-1650) is one of the foundational philosophers and mathematicians of Western Civilization. His most famous line is: “I think, therefore I am.”

Think he did, and following the natural light of reason he journeyed into the depths of the human psyche. His quest therein crosses paths with yoga philosophy, which is rooted in Eastern philosophy, in particular he veers in the direction of Advaita Vedanta, a philosophy most notably expressed in the 20th century by Ramana Maharshi.

Ramana Maharshi (1879-1950) invigorated the teachings of the Indian teacher Sharkaracharya (8th Century) who reinvigorated the ancient Indian philosophy of Advaita Vedanta. These teachings find their parallel in Idealism, which asserts the primacy of the consciousness of the observer as the basis of reality. This is closely linked to Subjectivism, which says that our individual mental activity is the only thing that is absolutely certain.

How Descartes Intersects with Yoga

Let us imagine that Descartes travels forward in time, from his time, which he would admit to being a quite legitimate possibility, and winds up in southern India in 1936 at the ashram of Ramana Maharshi. We travel back in time to witness the meeting. The two men begin to discuss the ultimate nature of existence and quickly realize that they share an analogy and teaching, which offers insight into the nature of knowledge and the intellect of human beings.

The analogy they have in common is that of an individual being asleep and dreaming and yet not knowing they are asleep and dreaming.  Another way of stating the key element of this example is that we cannot distinguish between waking and dreaming because both states are created by our minds and our minds create our individual reality. Unless we discriminate carefully we tend to belief everything that our senses and thoughts convey to us.

Descartes uses this example to instruct us that we cannot trust our senses in our quest for ultimate knowledge because the senses do not always perceive even common truths. For example: the fact that we are actually asleep dreaming, whereas we think we are being chased by tigers through a forest. Descartes asserts that if we cannot trust our senses in one case we should never trust them in our quest for ultimate truth.

Ramana Maharshi uses the dream analogy to illustrate that the mind creates our reality and since this reality is always shifting: dreamscapes changing as well as waking scapes changing, we must look elsewhere to find the changeless reality. He asserts that only that which does not change is real. Some refute this saying that although the dreamscape is constantly shifting not so with the waking state. Observe carefully the world around you and you will see constant change. The sky, oceans, society, people, your thoughts and on and on. Nothing stays steady. Dream is short and waking is long but both are in flux. Add to that the fact that your and point of focus and hence personal reality is always shifting.

In their discussion the two men would hopefully agree that whereas Ramana says he is helping people to find the changeless and Descartes is helping them to find pure knowledge, they are both essentially talking about the same thing.

In the quest for truth Descartes doubts what his senses convey to him. Ramana looks at all that is generated by the mind and says, “Neti, neti, not this, not this,” as he searches for that which is unchanging. They both advocate eliminating false knowledge in the quest for true knowledge.

Given this shared starting point and dream reality, do Descartes and Ramana point us in the same direction from there?

Ramana says that the next step is to feel and realize that amidst all the change between dream and waking there is one thing that is constant: the sense of self. The awareness of the “I” that is having the experience; regardless whether it is a dream or waking reality there is always me at the heart of it. Ramana says to sink into that sense of self and therein you will connect with ultimate reality, the reality of being which transcends the mental fabric of mind. Ramana suggests that as thoughts and emotions arise we observe them and ask ourselves, “To whom has this thought arisen?”  The answer is, “To me.” One can then ask, “Who am I?” That is the inquiry that leads to the substratum of reality.

Descartes does not codify the process as succinctly as Ramana, who had a 200 + years of human evolution to draw upon.  Admittedly the concept of human evolution does throw some confusion into our time travel meeting as Descartes gets to go forward in time but still has his thought process from 200 years back.

Descartes does though arrive at the same understanding. He comes to the realization that the only certain thing is that he exists and is the thinker and observer of all his thoughts. Thus he says, “I think, therefore I am.” It is the essential awareness of the self at the center of all.

Guided Meditation: Free Will and Destiny

Guided Meditation: The Observer & the Observed